An aerial photo taken in July shows the China-Laos Railway’s Mohan train station in Yunnan province. The station is the last stop in China before the railway crosses the border to enter Laos. YANG ZIXUAN/FOR CHINA DAILY
China-Laos Railway connects with global transportation network, improving lives on both sides of border

A Chinese saying has it that if you want to get rich, build a road first.

Mohan, a far-flung town deep in the southern part of Southwest China’s Yunnan province, now has more than a road. To its advantage, it also has, as the result of hard work over the past decade, the China-Laos Railway.

The rail line not only links Mohan with the rest of China, but with the outside world as well, including Laos and other countries in Southeast Asia. As a result, the border town has become a “frontier” of transportation links.

The railway is 1,035 kilometers long, and its trains have a design speed of 160 kilometers per hour. The rail line runs from Kunming, the capital of Yunnan, and passes through 13 passenger and freight stations in the province before leaving China at the Mohan land port, continuing on to Vientiane, the Laotian capital. There are 10 stations along the Laos section of the rail line.

As of early August, the China-Laos Railway had carried over 5.5 million travelers, according to China Railway Kunming Group. 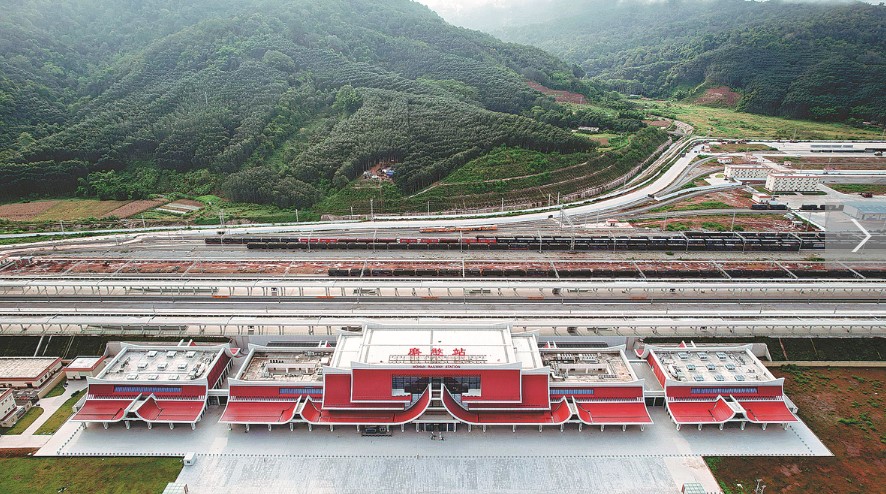 Among those who have seen direct benefits from the rail line is Yan Dongkai, 26, a farmer who lives in a village in Mengla county that was formerly inaccessible. He made ends meet through growing rice, corn crops and rubber trees. Mengla, in which the town of Mohan is located, is famous for its rubber trees.

The China-Laos Railway changed the situation dramatically for Yan and others.

“It takes only five hours to reach Kunming by riding the China-Lao Railway,” Yan said. “People in our village are finding odd jobs in the railway stations and related projects and are living a better life.”

The land port within the jurisdiction of Mohan is on China’s border with Laos and offers convenient land passage to Southeast Asia. The Mohan train station is the last stop in China before the China-Laos Railway crosses the border. The station is surrounded by villages of ethnic minority people such as the Dai and Hani.

Yibofeng, a 24-year-old woman of the Dai ethnic group, who lives in Xishuangbanna in the southwest tip of Yunnan, studied the Laotian language at a Kunming-based technical college before working as a train conductor on the Chinese part of the China-Laos Railway.

“It took me two days to go to the college by bus. It was really a rough journey,” she said.

Now it takes only six hours for people in Yibofeng’s village to travel to Kunming using the railway.

Previously, Yibofeng’s mother was able to sell her handmade Dai garments only in adjacent villages. Now, thanks to the railway, her garments have found a market in Kunming.