BAGHDAD－Iraq’s powerful cleric Moqtada al-Sadr ordered his followers to end their protests in central Baghdad on Tuesday, easing a confrontation which led to the deadliest violence in the Iraqi capital in years.

Apologizing to Iraqis after 22 people were killed in clashes between an armed group loyal to him and rival Shiite Muslim factions backed by Iran, Sadr condemned the fighting and gave his own followers one hour to disperse.

“This is not a revolution because it has lost its peaceful character,” Sadr, a former anti-US insurgent leader, said in a televised address. “The spilling of Iraqi blood is forbidden.”

As the deadline passed at around 2 pm, Sadr’s followers could be seen beginning to leave the area in the fortified Green Zone in central Baghdad where government offices are located and where they had occupied parliament for weeks.

He has also launched an investigation into the casualties, pledging to identify the perpetrators and hold them accountable according to the law. 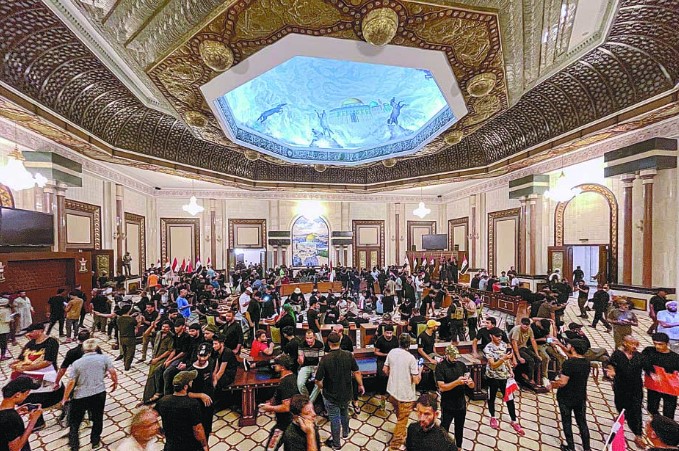 Iraq’s military announced the lifting of a nationwide curfew, further raising hopes that calm would be restored after fears instability might spread throughout the country and even the region.

Amid heightened tensions, the United Nations Assistance Mission for Iraq and the Arab League called for all Iraqi political actors to work toward de-escalation.

“Today’s developments are an extremely dangerous escalation,” said the UN mission in a statement, calling on all protesters to leave the Green Zone immediately and vacate all government buildings.

“The Arab League is following all the measures taken by the Iraqi government to maintain civil peace, security and stability in the country,” it said in a statement.

Political disputes have escalated in past weeks between Sadr and his rivals in the Coordination Framework, an umbrella group of Shiite parliamentary parties.

On July 30, Sadr’s followers broke into the heavily fortified Green Zone in central Baghdad and held a sit-in protest in and outside the parliament building, demanding the dissolution of parliament and called for early elections, which were all rejected by CF parties.

The bloc became the largest alliance in the Iraqi parliament after Sadr ordered his followers in the Sadrist Movement to withdraw from parliament.